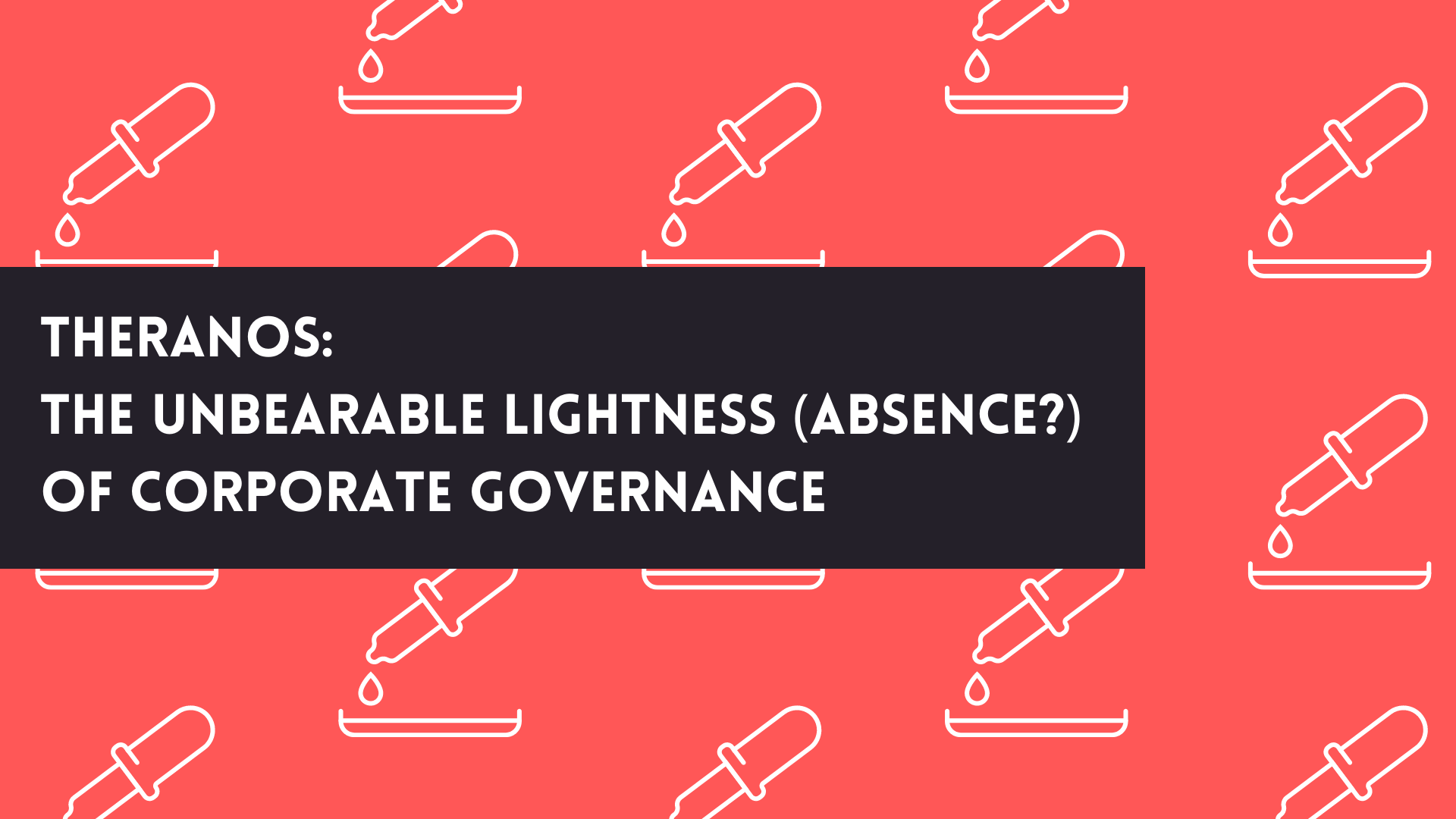 This blog post was originally published in Japanese and can be found here.

In January 2022, Elizabeth Holmes, former biotech entrepreneur and founder of Theranos who raised nearly 100 billion Japanese yen from investors, was convicted. Looking back, many wonder how this could have happened. The case of Theranos illustrates the difficulty of governance in startups.

At one point, Theranos–with Holmes’ big claim that “a drop of blood can diagnose all diseases–was worth more than a trillion yen. Holmes was hailed as the “second coming of Jobs” and named to Forbes Magazine’s list of self-made billionaires. However, a meticulous investigative report by a Wall Street Journal reporter exposed the lie and Theranos went bankrupt. Holmes was indicted on fraud charges.

Fake it till you make it

Investors (and the public and media) love entrepreneurs who tell big dreams, often packaged well through a “growth strategy” or “equity story”. Raising big rounds requires the ambition to change the world. Meanwhile, running a startup is like building an airplane while jumping off a cliff. There is no way to know if the plane will fly, but survival depends on whether the founder can convince investors they are an expert in airplane construction. This has fostered a “fake it till you make it” culture in the industry. Holmes was an entrepreneur who immersed herself in this culture.

Board of directors lacking in diversity

One reason investors and the media trusted Theranos was its stellar lineup on its board of directors, which included: George Schultz, the former Secretary of State who led the Cold War to a conclusion. George Shultz, the former Secretary of State who helped bring the Cold War to a close. And Henry Kissinger. Channing Robertson, a star professor at Stanford University, was a scientific advisor. Larry Ellison, the founder of Oracle, was a mentor to Holmes. All were experienced, elderly Caucasian men with distinguished titles. However, one can question whether this was a functioning board. The board, composed of people with similar backgrounds, gender, age range, and attributes, did not raise objections or criticisms. The same board, with no expertise in science, took Holmes’s word for Theranos’s claims and did not review financial statements. Theranos’s board members and advisors received large volumes of stock options and were focused only on the bright future Holmes was depicting.

Power harassment and its cover-ups

Power harassment and cover-ups were commonplace within Theranos. Working long hours was seen as a sign of loyalty. Those related to Holmes held important positions. Communication between departments was deliberately cut off. Merely disagreeing with or questioning Holmes and her lover, Sunny Balwani, led to immediate dismissal. Employees were bound by stiff confidentiality agreements. After leaving the company, former employees could not discuss their experiences without threats of lawsuits by powerful lawyers. Neither the shareholders nor the board scrutinized this corporate culture, and this ‘power harassment’ went on for a long time.

Although Theranos’s shareholders included funds specializing in health care, most were so-called family offices, private wealth offices managed by America’s ultra-wealthy. (Ironically, Rupert Murdoch–chairman of the holdings company that owns the Wall Street Journal, which exposed Holmes’s lies–was among Theranos’s shareholders.) The prospectus for investors included an article about Holmes in Forbes magazine and a report featuring the logo of a major pharmaceutical company (later taken to court for false claims). For some, media coverage of Holmes’s story and affiliation to a famous pharmaceutical brand was enough to invest, and they did so without even verifying the product. The media, which covered Holmes extensively, relied on the endorsements by ‘star’ board of directors rather than on the backing of experts.

The blurred line between real and fake

In most cases, one can forgive failure in the earlier analogy of “building an airplane while jumping off a cliff” for a software company. Even if there are issues with software, lives are not at stake. However, in medical technologies, it is a different story; blood test results directly impact a person’s life. Doctors and patients were key stakeholders for Theranos, but Holmes stuck to her own agenda and prioritized investors and big partners such as Walgreens. Theranos may seem like an extreme example and easy to figure out, but in reality–especially in the moment–it is not so easy to distinguish what’s real and what’s not. Undeniably, Holmes wanted to change the world with her technology, and I believe that she was not lying about this one point. (As proof, in her trial it was emphasized that Holmes never sold a single stock until the very end.)

I realize I am not immune to falling for a company like Theranos. In fact – I, for one, could fall for one at any moment. It is very difficult to distinguish whether a manager’s big ‘talk’ is a noble aspiration or a complete lie. A startup ‘unicorn’ has realized their grand scheme, and investors are thirsty for such opportunities. As I admit that I am ready to be fooled, a few signals could guide us to stay wary. Though seemingly common sense, I remind you of them:

・Beware of all-star board members!  Be especially careful of groups that are too homogenous, and be even more careful if there are no industry experts on the board.

・Watch out for companies that give out large amounts of stock options to external directors and advisors! If these stakeholders have substantial stock, they may not want to hear dark stories, though this sentiment might not be deliberate. The risk of undermining independence and neutrality is not insignificant.

・Watch out for what the media says!  Just because a story is featured prominently in Forbes, the Wall Street Journal, or Nikkei, it does not mean it is true. Even with a cautious lens, catchy articles can subliminally instill preconceived notions, both good and bad.

・Beware of non-sophisticated investors!  If the company is a serious biotech or deep tech company, and there is no professional fund on the cap table, we ought to be suspicious.

・Try the product first!  Walgreens (a pharmacy chain) had already made testing using Theranos equipment available. (Some people invested in the company before the product was launched, but a huge amount of money flowed into the company even after the launch.) By going to Walgreens to get tested, one could have known that the reality was quite different from “a drop of blood can reveal all diseases.”

・A massive lie is more difficult to catch than a small one. Perhaps the grandest of Holmes’s lies was that the Theranos device had been adopted by the US military and was saving the lives of soldiers in Afghanistan and Iraq. Others included: that the effectiveness of Theranos had been validated at Johns Hopkins University, and that a major pharmaceutical company had endorsed its effectiveness. In fact, it is the statements that one would think, “I would never tell a lie that obvious,” that can go unquestioned and unexposed.

It is very difficult to be simultaneously intellectually open and modest. It’s easy to be pessimistic, critical, and look for fault, as it makes you look intelligent. And meanwhile, an optimistic leader has a better chance of making big dreams come true. I think the role of governance for early stage startups is to ground the big dreams that founders depict, ensuring that there are sincere efforts to make them come true, rather than end in just a “lie”. Diversity is not just a fad, but a tool to fill blind spots and reduce risk. In a psychologically safe organization, the seeds of a major failure can be detected at an early stage, innovation can be easily generated, and talented people can focus on realizing their dreams. If Theranos had invested even a fraction of the 100 billion yen it raised in governance, and if a diverse and objective management team and board could face both their strengths and shortcomings from early on, they could have really changed the world.